There is a continuum of sweetened yeasted bakery goods across several gastronomic cultures: namely, the corek-tsoureki-brioche-challah-colombina/pannetone type of yeasted bakery goods. Tsoureki (pl. ‘Tsourekia’, the ‘t’ and ‘s’ are not silent) is the Greek (and no doubt Balkan) version of this sort of bakery good.

It is lightly scented with ‘mahlepi’, the pounded dried kernels from the stones of wild cherries, that imparts a sort of earthy nuttiness to it. I’m unable to liken the smell and taste of mahlepi to anything else I’ve tried. If pushed I’d say there’s a very faint whiff of paint stripper about it which, admittedly, doesn’t really make it sound all that appetising. But it is indispensable to a classic tsoureki.

Pounded ‘mastic’ – the resin drops from the Mastic plant that is indigenous to the island of Chios in the North Aegean – is also used for a classic tsoureki. Again, that’s a scent there really isn’t anything to which I could possibly liken it.

Both those scents, albeit rarely used in Greek cuisine, are familiar to those who’ve lived in Greece, or in contact with the Greek diaspora, as these are scents associated with particular festive foods (e.g., tsourekia at Easter), or with particular comfort foods (e.g., rice pudding). The aroma of mahlepi permeates many a Greek home on tsoureki-baking day, which is usually a few days before Easter Sunday. Mastic, for its part, whilst used on more occasions than mahlepi in Greek cuisine, is again a scent and ingredient that, whilst quintessentially Greek, doesn’t really feature all that often. Kaymaki ice cream – essentially ice cream based on double cream – is scented with mastic which, as a type of emulsifier, imparts a more dense, more ‘stringy’ type of, texture to it. Rice pudding is also scented with mastic which, again, gives it a much more emulsified/set texture than, say, English rice pudding.

Every household is likely to have its own recipe, which is likely not only to vary in the exact proportions of the main ingredients, but, also, on the ingredients themselves (e.g., lemon zest instead of mastic or orange zest etc). I’ve used this recipe here (in Greek) successfully on several occasions and have been pleased with the results. It has resulted in consistent bakes so I’ve stuck with it. I prefer working with fresh yeast as there is a difference in taste and texture (or so I think).

1. Heat 100ml milk to lukewarm – don’t overheat as you’ll end up scalding and ruining the yeast – add to a bowl with the yeast and 60g of the flour to make a yeast sponge. Cover with cling film and leave somewhere warm to get the yeast going. About 20′ should be fine.

2. In the meantime, melt the butter in a saucepan in which you’ve heated the remaining milk. Mix in the sugar, orange zest, mahlepi, vanilla, and eggs. Again, make sure this milky buttery mix isn’t too warm by the time you add the eggs as it’ll scramble them. You want it to be tepid.

3. Empty the yeast sponge into a larger bowl and mix in the milky sugary buttery ‘wet’ mix. Add the remaining flour and salt, and mix well with a wooden spoon. The dough will be quite wet and sticky, and won’t come together in the way that bread dough does. So you won’t be kneading it against any surface. Just mix well with a big wooden spoon to incorporate the ingredients, cover the bowl with cling film, and leave the dough somewhere warm (but not hot) to rest and prove for three hours.

4. Now turn the dough out onto a floured work top. Lightly dust the dough and your hands with flour too. It’s a wet dough so don’t want it to get all sticky. Gently divide the dough into four lots without knocking out of it too much air. Then, further divide each lot into three to get your braids. Roll out these three into cylindrical shapes and then braid these into a plait. See photos. Repeat with the remaining three lots.

5. Butter two deep baking trays and line with baking parchment all the way up to the sides – this will help you remove the tsourekia after you’ve baked them. Place two plaits side by side in each tray.

6. Heat the oven to not more than 50C and place your trays in it so that the dough proves for a final time for not more than 30 minutes.

7. Remove the trays from the oven, turn the oven up to 180C (fan), brush plaits with egg wash — do this carefully as to not pierce the skin of the plait as it’ll deflate — and then sprinkle the plaits with almond flakes. Bake one tray at a time at the middle rack for 15-20′. Check at the 15-minute point and if they have browned enough, they’re done.

8. Remove tray from the oven, let the plaits cool for 10′ then remove, by lifting the sides of the parchment, and place on a rack to cool. Once fully cooled, wrap in cling film or store in some airtight container to keep the loaves fresh and soft. Tsoureki can keep for about a week or so.

And that’s how you make tsoureki! I enjoy eating mine sliced and always with lashings of butter and either apricot jam or nutella.

Other versions include: making a sugar glaze (icing sugar plus a drop of vanilla and 2 tbsp orange juice) and brushing the tsourekia once out of the oven (in this case don’t use flaked almonds); and rather than braiding, I lightly roll the dough out into rectangles, sprinkle/spread a filling containing chopped walnuts, chocolate, cinnamon, raisins or figs, butter, and moist brown sugar, (or an alternative filling with pistachios, candied pistachios, and butter) on it, then roll this into a log which I then either slice into 3-inch rolls or simply coil the log into a round bun. See photos for ideas. 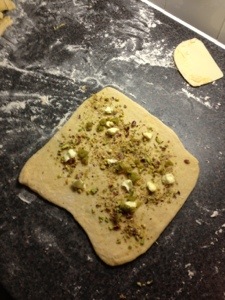 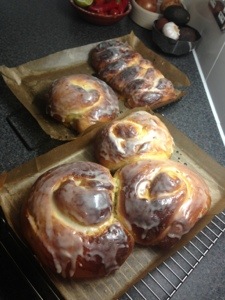 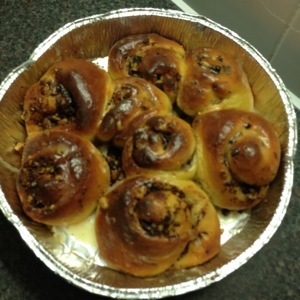 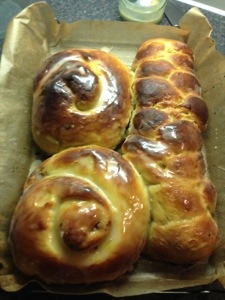 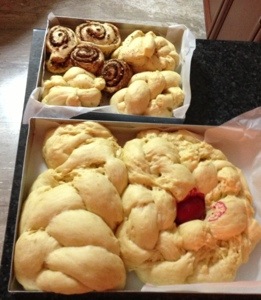 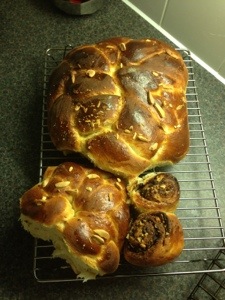 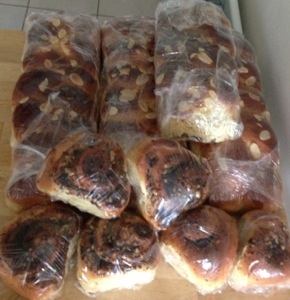